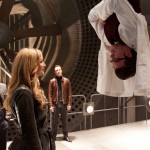 The X-Men franchise has been going for several years now, so what can this latest addition to the franchise bring?   We know it's a prequel of sorts, which seems to be increasingly popular with film studios. Got a semi-decent film franchise? Having problems tying on another sequel? Solution. Do a prequel! So what's this one all about … END_OF_DOCUMENT_TOKEN_TO_BE_REPLACED