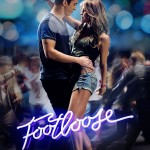 The 2011 reboot (or revamp?) of Footloose goes on general release in the UK and Ireland this Friday. The original Footloose was originally released back in 1984 (I'm old enough to remember that!) This time round the cast is headed by newcomer Kenny Wormald, who plays the role of Ren MacCormack who is transplanted from the big city (Boston) to a small town (Bomont). So … END_OF_DOCUMENT_TOKEN_TO_BE_REPLACED