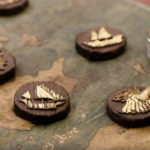 Game of Thrones Season 7 won't be on our screens for quite some time. However in order to whet everyone's appetite, or simply to drive them nuts with expectation, HBO has released a very stylish "teaser" video. Unlike the more traditional teasers you get for movies or shows that have actually been shot, the HBO teaser goes behind the scenes of the production. At just over 2 … END_OF_DOCUMENT_TOKEN_TO_BE_REPLACED