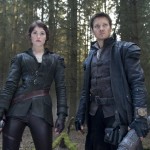 Remember the story of Hansel and Gretel? Imagine what happened to them later .. Well now you don't have to .. Hansel and Gretel: Witch Hunters picks up the story of the pair 15 years later where they've evolved into well .. witch hunters. Here's the trailer: The film, which goes on release in 3D in early 2013, stars Jeremy Renner as Hansel and Gemma Arterton as … END_OF_DOCUMENT_TOKEN_TO_BE_REPLACED