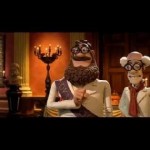 Go behind-the-scenes and take a look at the first news wrap feature for the amazing new Aardman Animation out March 28th, 2012. In The Pirates! In an Adventure with Scientists, Hugh Grant stars in his first animated role as the luxuriantly bearded Pirate Captain -- a boundlessly enthusiastic, if somewhat less-than-successful, terror of the High Seas. With a rag-tag crew at his … END_OF_DOCUMENT_TOKEN_TO_BE_REPLACED