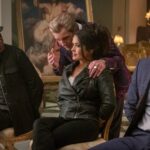 Ryan Reynolds and Samuel L Jackson are reunited for a sequel to 2017's The Hitman's Bodyguard. This time round they're joined by Salma Hayek and Antonio Banderas and if the teaser trailer is anything to go by it'll be a nice bit of fun escapism. We probably need it! In this instalment of the franchise Reynolds's character Michael Bryce is trying to take time off from being a … END_OF_DOCUMENT_TOKEN_TO_BE_REPLACED