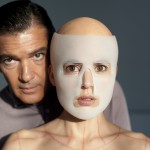 Coming in August is Pedro Almodovar's latest film - The Skin I Live In (La Piel Que Habito) He's reuniting with Antonio Banderas and they've taken the film to the Cannes festival for its premiere. The film is being presented El Deseo. The soundtrack is by Alberto Iglesias. Here's a first image       … END_OF_DOCUMENT_TOKEN_TO_BE_REPLACED