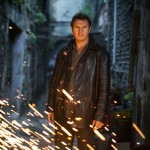 Liam Neeson's quite brutal embodiment of a former CIA agent in Olivier Megaton's Taken was either fantastic or terrible, depending on whose review you agreed with. He'll be reprising the role in the sequel Taken 2 which goes on release on October 5th This time round it's Neeson's character who gets kidnapped .. … END_OF_DOCUMENT_TOKEN_TO_BE_REPLACED