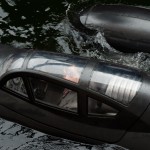 Captain America: The First Avenger is being released by Paramount Pictures on July 22 2011. It's another screen version of a Marvel hero. In this one the Chris Evans plays Steve Rogers who volunteers for an experiment which turns him into Captain America - the super soldier. The cast includes Chris Evans, Tommy Lee Jones, Hugo Weaving, Hayley Atwell, Sebastian Stan, … END_OF_DOCUMENT_TOKEN_TO_BE_REPLACED