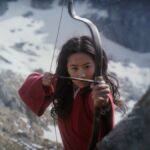 Disney will be streaming their upcoming blockbuster Mulan on the Disney+ platform. It won't be getting the wide cinema release that had been originally planned as a result of the global pandemic. However the film is not included in the standard priced Disney+ plan, so if you want to watch it you'll have to pay an extra fee. For Irish users the fee to watch Mulan will be … END_OF_DOCUMENT_TOKEN_TO_BE_REPLACED