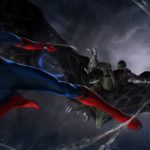 The Spider-Man franchise has been through two iterations on the big screen in the last 15 years. It looks like it's getting yet another "reboot" or "kiss of life" with a new roster of actors taking up the roles in one of Marvel's more popular titles. The upcoming "Spider-Man Homecoming" goes on general release in the United States on July 7th 2017 and will star Tom Holland, … END_OF_DOCUMENT_TOKEN_TO_BE_REPLACED