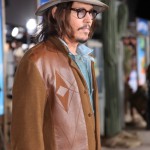 Johnny Depp is the voice behind Rango in the upcoming Paramount pictures release. The film's premiere was held in Los Angeles on Valentine's Day with several of the cast present. Here's a shot of Johnny Depp at the Regency Village in Los Angeles where the premiere took place: Related articles Johnny Depp and Isla Fisher Make a Hot Duo at the Rango Premiere … END_OF_DOCUMENT_TOKEN_TO_BE_REPLACED

For years, there have been documented cases of UFO sightings around the world -- Buenos Aires, Seoul, France, Germany, China. But in 2011, what were once just sightings will become a terrifying reality when Earth is attacked by unknown forces. As people everywhere watch the world's great cities fall, Los Angeles becomes the last stand for mankind in a battle no one expected. … END_OF_DOCUMENT_TOKEN_TO_BE_REPLACED