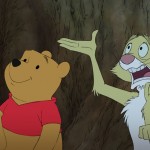 Winnie The Pooh goes on general release on April 15th. Do I really need to introduce Winne The Pooh? It's been 35 years since the last big screen outing for one of Disney's favourite characters and by the looks of things the studio hasn't tried to modernise the look and feel or, Lord forbid, render it in 3D! (Not that there's anything wrong with 3D, but like you know.. … END_OF_DOCUMENT_TOKEN_TO_BE_REPLACED