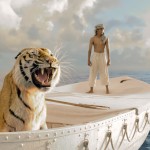 Life of Pi goes on release in Irish cinemas on December 21 The film is directed by Ang Lee of Crouching Tiger Hidden Dragon fame and has a cast that includes Suraj Sharma, Gerard Depardieu, Tobey Maguire, Irrfan Khan and Tabu Shot in 3D it looks like it's going to be a visual spectacle if the trailer is anything to go by:   Related articles Here's the … END_OF_DOCUMENT_TOKEN_TO_BE_REPLACED