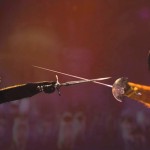 Puss In Boots, starring the voice talents of Antonio Banderas (Puss) and Salma Hayek (Kitty Softpaws) goes on release on DVD and Bluray in Ireland and the UK on March 26th. The film was released on DVD and Bluray in the US on Friday. The film has been nominated for an Oscar for Best Animated Feature Film where it goes up against Kung Fu Panda 2, Rango, A Cat in Paris and … END_OF_DOCUMENT_TOKEN_TO_BE_REPLACED