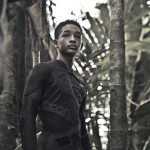 Jaden Smith stars alongside his father Will Smith in the upc0ming release of "After Earth". The movie, which is directed by M. Night Shyamalan, is set in a "post-post-apocalyptic" earth setting, where humans have been forced to abandon our planet and move elsewhere, with earth being allowed to return to a prime state and evolve by itself. Translation - it's become an … END_OF_DOCUMENT_TOKEN_TO_BE_REPLACED