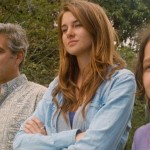 I wasn't exactly impressed with the last George Clooney film I saw (The American), though he has done some fantastic work in the past, so maybe this next one, The Descendants, will be a return to form? So here's the lowdown. The film is going on release in Ireland and the UK in January 2012 and stars George Clooney, Judy Greer, Beau Bridges, Matthew Lillard, Robert … END_OF_DOCUMENT_TOKEN_TO_BE_REPLACED