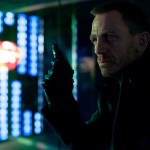 Here's the first photo from the upcoming James Bond film Sky Fall starring Daniel Craig The film goes on release on 26th October 2012. This will be Daniel Craig's third outing as James Bond 007 and the film will see the return of some other familiar faces including Judi Dench.   Related articles Skyfall: James Bond first photo (guardian.co.uk) … END_OF_DOCUMENT_TOKEN_TO_BE_REPLACED

The release date of the 23rd Bond film has been announced. Bond 23 will go on general release on 26th October 2012. The US release date is slated for November 9th 2012. Daniel Craig will reprise the lead role, while Sam Mendes will be directing. The title has not been announced as yet. … END_OF_DOCUMENT_TOKEN_TO_BE_REPLACED