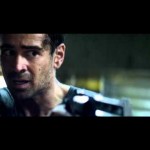 Total Recall is an action thriller about reality and memory. Welcome to Rekall, the company that can turn your dreams into real memories. For a factory worker named Douglas Quaid (Colin Farrell), even though he's got a beautiful wife (Kate Beckinsale) who he loves, the mind-trip sounds like the perfect vacation from his frustrating life -- real memories of life as a super-spy … END_OF_DOCUMENT_TOKEN_TO_BE_REPLACED

Doug Trumbull discusses his vision behind the special effects used in THE TREE OF LIFE. … END_OF_DOCUMENT_TOKEN_TO_BE_REPLACED

Director Garry Marshall and a stellar ensemble cast will ring in the 2011 holiday season with the romantic comedy "New Year's Eve." "New Year's Eve" celebrates love, hope, forgiveness, second chances and fresh starts, in the intertwining stories of couples and singles, told amidst the pulse and promise of New York City on the most dazzling night of the year. … END_OF_DOCUMENT_TOKEN_TO_BE_REPLACED