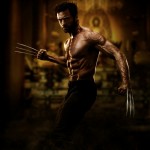 The Wolverine starring Hugh Jackman goes on release in 2013. The sequel is meant to be a "standalone" and not part of the X-Men series of films At the moment details are a bit scant, but Logan / Wolverine goes to Japan to train with a samurai ..   Related articles First Official Image of Hugh Jackman in THE WOLVERINE (collider.com) First look of Hugh … END_OF_DOCUMENT_TOKEN_TO_BE_REPLACED