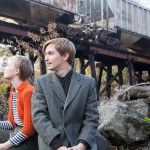 Restless does not sound like the kind of film that Hollywood likes too much. It sounds a lot more "artsy" It's not surprising, therefore, that the film will be released during this year's Cannes Film Festival The film stars Henry Hopper and Mia Wasikowska and was shot in Portland, Oregon.       Related articles Gus Van Sant's RESTLESS to … END_OF_DOCUMENT_TOKEN_TO_BE_REPLACED