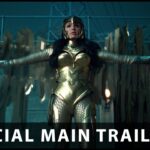 The new trailer for Wonder Woman 1984 was released yesterday. In common with most big film releases this year Wonder Woman 1984's release has been delayed by the global pandemic. It's currently scheduled for a global release in October 2020. The film stars Gal Gadot who reprises the title role of Diane Prince / Wonder Woman. Chris Pine is also making a return for the … END_OF_DOCUMENT_TOKEN_TO_BE_REPLACED