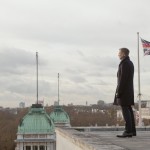 The next film in the James Bond franchise will be released in 2019. The as yet untitled film will be released on November 8 2019. Over the last few months there has been a lot of discussion about whether or not Daniel Craig would return as Bond for any more films. For now it appears he will. Bond 25, the next adventure in the long-running action franchise, will be … END_OF_DOCUMENT_TOKEN_TO_BE_REPLACED

Following on from James Bond (Daniel Craig) making an appearance in Friday night's Olympics opening ceremony Sony Pictures / Eon Productions have released another trailer for the 23rd James Bond film Here it is in all its glory - it's pretty high definition so you can watch it in full screen mode comfortably on most computers :) [jwplayer config="Comingsoon-large" … END_OF_DOCUMENT_TOKEN_TO_BE_REPLACED