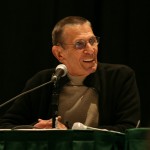 Although we won't actually get to see him on screen, Leonard Nimoy will be making an appearance in Michael Bay's upcoming Transformers 3 Dark of the Moon.   Nimoy, who seems to have been trying to retire from acting for years, is making yet another comeback as the voice of Sentinel Prime.   Related articles Leonard Nimoy Voice Joins … END_OF_DOCUMENT_TOKEN_TO_BE_REPLACED