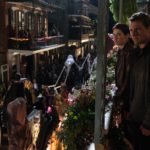 Tom Cruise will be reprising his role as Jack Reacher in the upcoming release "Jack Reacher: Never Go Back". The film is set to be released on October 21st 2016. I had my reservations about the choice of Tom Cruise to play Jack Reacher when he first took on the role for the first Jack Reacher film, which had the rather unimaginative title of "Jack Reacher". However even … END_OF_DOCUMENT_TOKEN_TO_BE_REPLACED